Betina and Murter have become an oasis of wooden boats. New boats are being made along with repairs of formerly disintegrated ones.

The introduction of plastic to the shipbuilding industry meant less shipbuilders who work with wood, so from the 1970s the construction of wooden boats has been decreasing. Nevertheless, Betina remained one of the main centers of small wooden shipbuilding on the Adriatic Sea. Today, there are shipbuilders in Betina who are capable of constructing all types of small wooden boats: traditional gajeta, leut or bracera, but also modern yachts.

At the beginning of the 21st century, the Betina shipyard employs 14 shipbuilders working with wood. They do repairs on bigger wooden boats and construct new boats. Several smaller shipyards are active, where small and medium-sized boats are built and renovated. There are also several freelance shipbuilders performing boat repairs outside the shipyards.

Great incentive for new shipbuilding are Lateen sail regattas. In the nearest vicinity 8 traditional regattas are being held, where a large number of wooden boats take part. At the most numerous cruise race – the one in Murter, they are up to 80, which is a great deal compared to the first regatta held in 1998 when 7-8 sails emerged. Regattas are certainly the main reason why ships are built and refurbished today. In addition to this, wooden ships today are mostly used for sailing and enjoyment.

Since the first regatta in 1998, a lot of ships have been built and reconstructed up to this date in Murter. Find some  of them listed below:

CICIBELA is a Betina gajeta of an older type. She was built in the Šime Filipi Tošulov boatyard in 1931 for Mr Tome Gregov, from Preko on the island of Ugljan. Originally she was used to transport labourers to their land for work, carry livestock and return harvest. During the Second World War Cicibela was used to secretly ferry refugees to the island of Kornat. She would leave by night for the island of Kornat where a bigger boat was waiting to ship them to El Shatt refugee camp. By day Cicibela was filled with rocks to submerge and hide her in shallow waters.

In 2002 Marino Mijat salvaged Cicibela in a damaged state from the boat dock’s Foša in Zadar. She had been flooded and had been left there since the Croatian War of Independence when she was very damaged. Marino bought Cicibela and returned her to Betina.

Reconstruction and restoration was completed by Čedomir Burtina. Only one fifth of the original construction remained. Every segment, one by one, was taken and a new one was replaced on  the boat. With this technique master Burtina was able to keep the authenticity intact for the old line of Gajetas.

In 2017 Cicibela became a moveable cultural heritage of the Republic of Croatia and as such became the first Gajeta listed as a protected cultural item.

Gajeta Baba Tone was built in the shipyard of Ante Filipi Tošulov in 1924. Her first owner was Jere Mikin, who sold the boat to Nikola Kulušić in Murter.  The Kulušić family used the gajeta for maintaining their property on Jarta, where they kept goats, and in the Kornati.

When the current owner Dario Filipi bought the gajeta she was in a very rundown condition. He wanted this boat as the first owner of the boat was his grandfather Jere Mikin. It was restored in 2013 by shipbuilder Čedomir Burtina Ćiro. He replaced every piece of the boat, keeping only one original sail so that the boat could be considered to be original. Baba Tone currently sails in all regattas in immediate vicinity and takes part in the Women’s rowing regatta “Dlan i veslo”, which is held on the first Sunday in August, on the “Dan brganje” festival.

Gajeta Modravarka was built by shipbuilder Ante Fržop in 2005. The owner of the gajeta, Ognjen Jakovčev, wanted to build a new ship modelled after their old family ship, owned by his brother. The original gajeta was built by shipbuilder Nikola Šandrić in 1975. The new ship which Ante Fržop built conforms to the original one with its dimensions and form, but it bears the mark of its builder. Modravarka is used for fishing, trips to olive groves in Tegina and in Modrave. The Jakovčev family regularly takes part in lateen sail regattas.

Leut Gušte was built in 2013 by shipbuilder Ante Fržop. The owner of the boat, Tonko Skračić previously owned a leut Gušte, which was physically smaller than the present one. When the boat got old, he decided that he wanted a larger cargo vessel with considerable cargo carrying capacity. He agreed on the dimensions and shape of the boat with the shipbuilder, and Gušte is currently used to transport olives and timber from large family olive groves in Kurnati.

The new Gušte passed the test shortly after launching. With the boat less than one year old, Tonko Skračić and his crew set off to remote regatta Rota Palagruzona.

Shipbuilder Nedjeljko Sladić started building the gajeta Dišpetoža for his personal needs. In 2009 he decided to sell the unfinished boat to Krešimir Bosna, the current owner of the boat. Shipbuilder Siniša Mikin completed the gajeta by sheeting the boat. Krešimir’s father made the mast and lantina by himself and assembled the boat.

The boat is owned by the Bosna family primarily for leisure. In the summertime they take the boat to go swimming, they sail in the regattas and take part in the rowing regattas. When needed, they take the Dišpetoža fishing and travel to family owned olive groves on the surrounding islets. 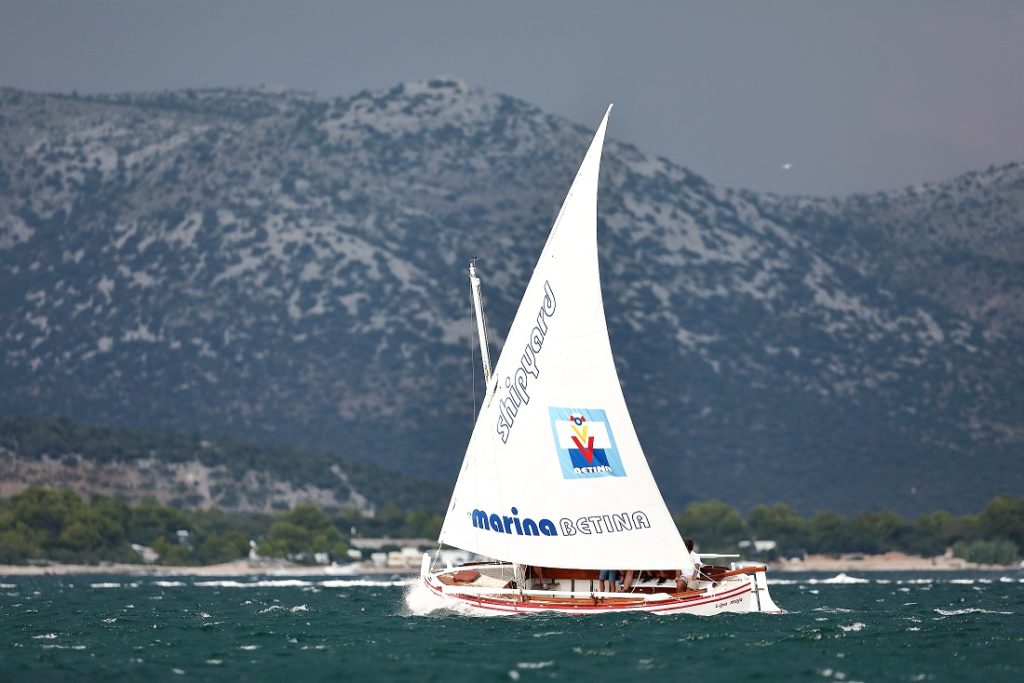 Shipbuilder Ante Fržop built the boat for his personal needs, primarily recreational fishing. The boat Marinka played an important role in the life choice of young yachtsman Duje and Jure Fržop. It’s sailing in the lateen sail boat that provided the motivation to currently some of Croatia’s best sailors.

Today the boat is used for enjoyment and sails in lateen sail regattas. She is unbeaten in her class.

Gajeta Baba Majo was made in 2018 by master Milan Jadrešić – Pile for the owner Tomislav Tičić from Zadar. Gajeta is 6.50 meters long and 2.55 meters wide. The launch took place at the main square in Betina, in a very old-fashioned way.

Leut Kvarneriol, 8 meters long and 3 meters wide, with a 12-meter-long lantina (yard) and a 57 HP engine, registered for the transport of 12 people, equipped with a 150l oil tank and a 150l water tank, a toilet with a sink and a cooking area. Kvarneriol is made for several days of sailing and a longer stay at sea. Frames are made of a mixture of oak and elm, the deck is larch. The cabin is made of mahogany. The sohe (traditional oarlocks) are made of black elm. Both black and white elm are used in shipbuilding. This black one has a good vein that was interesting to the shipbuilder. For this reason, he used varnish instead of traditional paint. Some things suffer from varnish. This boat is more for sports, says the shipbuilder. These parts will not be used much so the soha (oarlock) can be used for decoration. The desire of the boat owner was to make some kind of a fence around the mrtva banda (“false” side bulwark), to be safer, to have a secure space while walking on the side. In order not to disturb the traditional appearance of the ship, the shipbuilder suggested one oar to be placed on the right side, and the other one stays on the hrokate (oar davits, oar carriers). He kind of repeated his design from his previous work, leut Orlić. Small modifications have been made, a small part has been added to the traditional oar locks and now they also serve as oar carriers. On the right, hrokate (oar davits, oar carriers) have never been placed traditionally. The oars put in this way work as a fence and are also nice to see, they are functional and fit perfectly to the boat.

The design is like one of our traditional boats – turned into a yacht, but still traditional because she can be paddled on two oars if there’s a need to. One oar on the bow, another oar on the stern. And you can also sail with her, as has always been sailed, traditionally, with a Lateen sail – said the shipbuilder Fržop about the ship.