Betina gajeta is a wooden boat between 5 to 8 meters in length and 2 to 2,60 meters in width, without a deck the entire length of the boat. It has a more robust shape than the Komiža falkuša or Korčula gajeta. Betina shipbuilders managed, through much innovation, to reach the proportions and the shape of a boat perfectly adapted to the everyday needs and the rural economy of the townspeople of Murter and Betina. The rural economy was mostly dependant of the oversea estates located on Kornati, islands in the Murter archipelago and in the Modrave area – a fruitful area between the sea and the Vrana Lake. 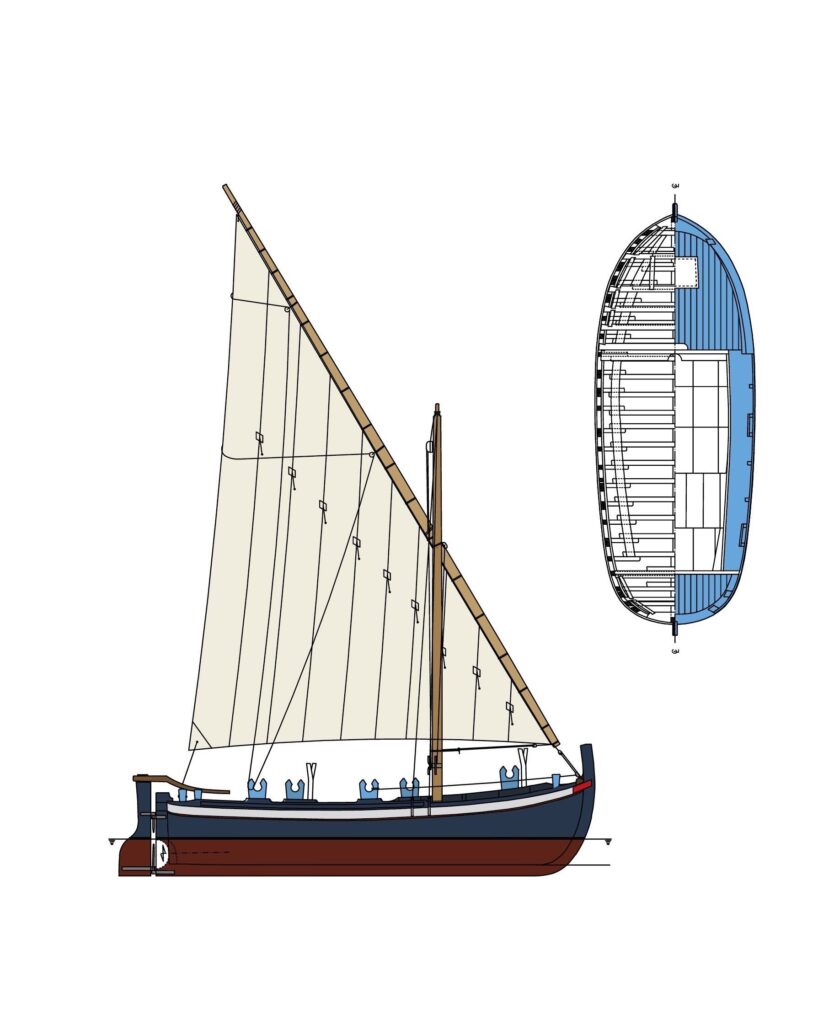 Considering the fact that the people of Murter used to be labourers and cattle breeders, rather than fishermen, Betina shipbuilders altered the fishing gajeta into a boat capable of satisfying their multiple needs. The primary function of the gajeta was transport of different types of cargo (food, produce, livestock, construction material). Gajeta is a family boat by its dimensions, and all the crew members had to know how to navigate it. The women often used the boat. Gajeta was used for fishing as well. The boat that was made to fit all the needs of the people of Murter had to be, above all, a capable, safe and sturdy means of transport. There are two types of the Betina gajeta, and the turning point that led to the construction of the second type was the incorporation of engine into the boat. This process started in the 1940s and 1950s.
The first, original type of gajeta, with a flat keel and a straight frame, which stayed the same between the beginnings of the 18th to the middle of 20th century, is a robust and a very stable boat. Its bow is quite high and its stern only a few centimeters lower. Modern times brought new requests and adjustments, therefore new boats became narrower, without sails and with cabins and upper cabins. The flat keel got a slight tilt and a long rudder was replaced with a shorter one. The stern post was adapted for the installation of the slide shaft. However, the Betina gajeta has kept its unique lines.

Betina shipbuilding is different from others that built the same or similar types of boats and it has some recognizable specificities. Some of the typical, and recognizable, characteristics of the Betina gajeta are: the oar grips (sohe) with the distinctive U-shape, a step located on the bow of the boat (an element of the boat that made it easier to get in and out of the boat, especially in a rocky, inaccessible parts of the coast), and kantun na mankulu (a boat part that is the most difficult to build, due to the bending of the belt on the each side of the stern).

Leut is a bigger boat with exceptional maritime attributes. The length of this boat us usually between 7 and 12 meter, while its width is about 1/3 of its length. According to their length, the leut boats can be divided into small ones ( up to 8,5 m) and big ones (up to 12 m). The hull has a sharp form and straight lines at the bow and stern. It reminds one of the gajeta but it is bigger and sturdier than gajeta and it has sharp underwater lines. It has a short beak, the so-called špirun, embedded at the bow. This beak is the same height as the deck and it is used for getting on and off the boat. Leut is, as opposed to gajeta, a closed type of boat. Špirun (beak) is one of its recognizable characteristics. The beak is shorter on longer boats and longer at shorter boats. It is used for boarding and disembarking of the crew and cargo, especially in shallow waters.

5, 7, or 9 oarsmen can navigate leut, depending on the proportions of the boat. The lateen sail is used for propulsion. Leut behaves well when it is windy or wavy. They are boats for general use. In the Murter area, it is used for transporting different types of cargo and for fishing.

DIFFERENCE BETWEEN LEUT AND GAJETA

There used to be different lengths of old gajeta boats, from 6 to 8 meters. Today there exists a division according to which gajeta needs to be shorter than 7 meters and leut longer than 7 meters. However, this division is inaccurate. Here are the characteristics of leut, those different from the ones of gajeta: deck along the entire length of the boat, mrtva banda (side borderline) of a minimum 20 cm of width, špirun (beak), and a stern cabin. Gajeta has mobile pokaporte (hatch doors), big deck stringer 30 cm plates and an extended murada (bulwark) on the left side of the bow. It does not have a banak (central seat), only pajole (garboards).

Now I am going to tell you why leut and not gajeta. The entire deck of the leut boat is stitched from one end to the other, it is open in the middle, and there is a small opening on the bow and on the stern. One is for the helmsman and the other is used when lifting nets and that sort of things. In addition, gajeta has mobile pokaporte. Only one-third of the gajeta is closed, it can be uncovered, and Leut cannot. Leut can be uncovered only in tis central part. That is the elementary difference. Some think that a boat is a leut when it has a beak at the front. Everyone thinks that Treun’s boat is a leut, but it is a gajeta.

Kaić is a smaller boat with a round bottom. There are big (up to 4, 80 m) and small (up to 8 m) ones. The small kaić is opened through its entire length and the big ones have the front third covered with a deck. Sometimes they have a hatch with a lid, which is used to enter the bow. Prova (stern) is pointy, the bow is cut and has a flat mirror at its end.

It is easy to navigate it and to row in it. It is also suitable for navigating in shallow parts and for crossing short distances. It is used for small fishing, sports fishing and recreation. It used to be used for night fishing under lights.

The Betina lađa is a wooden boat with a flat bottom and a wooden mirror placed at its stern. In comparison to other boats if this type, the one from Betina has a mirror that is only a bit narrower than the boat itself. The smaller ones are 4 to 5 meters long and longer ones 5 to 7 meters long. The latter ones are called lađuni. The flat bottom is curved towards the stem post. Two oars are used as mean s of propulsion, placed in the oar rigs in the middle of the boat. There is a shallow dent located on the top edge of the stern mirror, which is used, for rowing with one oar. This type of rowing is called gungula.

There is also a closed type of lađa. Their deck is covered on the 1/3 of the bow. Due to its flat bottom is can sail in shallow waters. It is mostly used for fishing and leisure during summer months.